We are OPEN: If you have an Eye Emergency or have a need to speak to us, call your most convenient practice today! Brisbane/Aspley/Booval/Wynnum
Latest News
You are here: Home1 / Latest News2 / General3 / Our Optometrist James giving back sight in Papua New Guinea 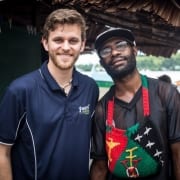 When our very own Optometrist, James Fuss, volunteered his services in Papua New Guinea he was able to give sight back to many including a local father called Nico in Ora Bay.

When James met first met Nico, he was squinting and had very low visual quality.

It seemed Nico was in pain, but James soon came to realise that the squinting was Nico’s way of trying to overcome the haze that veiled his eyes, he was desperately trying to focus his vision.

At 30 years of age, Nico’s whole world is blurry. He has a wife, a six year-old son and a job at New Britain Palm Oil that is limited to very simple tasks.

As James begins to assess Nico’s eyes, he finds that Nico had a cataract removed from his right eye a few years ago, but no new lens was inserted into the eye. In his left eye, he is blind from a previous condition.

The good news is, Nico’s eyesight can easily be improved with a pair of very strong glasses.

James fits Nico’s face with a trial frame and begins test his refraction. As a +8 lens slips over Nico’s eye, he stops squinting and his face immediately begins to relax; he can see!

Nico says to James, “this is the one!”

A pair of +8.75 glasses is found for Nico and fitted on to his face. He is smiling and pointing to landmarks in the distance. He begins to share how happy he is – a whole new world has opened up around him.

Nico shakes James’ hand, and thanks him for the glasses.

The patient who walked in squinting an hour ago, walked out with a smile on his face and his eyes wide open – Nico had transformed.

You can help people like Nico by donating both prescription and reading glasses to YWAM Medical Ships’ optometry team. Your simple pair of pre-loved glasses can change lives, just like Nico’s!

This site uses cookies. By using this site or closing this message, you're agreeing to our use of cookies.

We may request cookies to be set on your device. We use cookies to let us know when you visit our websites, how you interact with us, to enrich your user experience, and to customize your relationship with our website.

Click on the different category headings to find out more. You can also change some of your preferences. Note that blocking some types of cookies may impact your experience on our websites and the services we are able to offer.

These cookies are strictly necessary to provide you with services available through our website and to use some of its features.

Because these cookies are strictly necessary to deliver the website, refuseing them will have impact how our site functions. You always can block or delete cookies by changing your browser settings and force blocking all cookies on this website. But this will always prompt you to accept/refuse cookies when revisiting our site.

We fully respect if you want to refuse cookies but to avoid asking you again and again kindly allow us to store a cookie for that. You are free to opt out any time or opt in for other cookies to get a better experience. If you refuse cookies we will remove all set cookies in our domain.

We provide you with a list of stored cookies on your computer in our domain so you can check what we stored. Due to security reasons we are not able to show or modify cookies from other domains. You can check these in your browser security settings.

These cookies collect information that is used either in aggregate form to help us understand how our website is being used or how effective our marketing campaigns are, or to help us customize our website and application for you in order to enhance your experience.

If you do not want that we track your visit to our site you can disable tracking in your browser here:

We also use different external services like Google Webfonts, Google Maps, and external Video providers. Since these providers may collect personal data like your IP address we allow you to block them here. Please be aware that this might heavily reduce the functionality and appearance of our site. Changes will take effect once you reload the page.

The following cookies are also needed - You can choose if you want to allow them: